How Much Does Outdoor Advertising Cost? 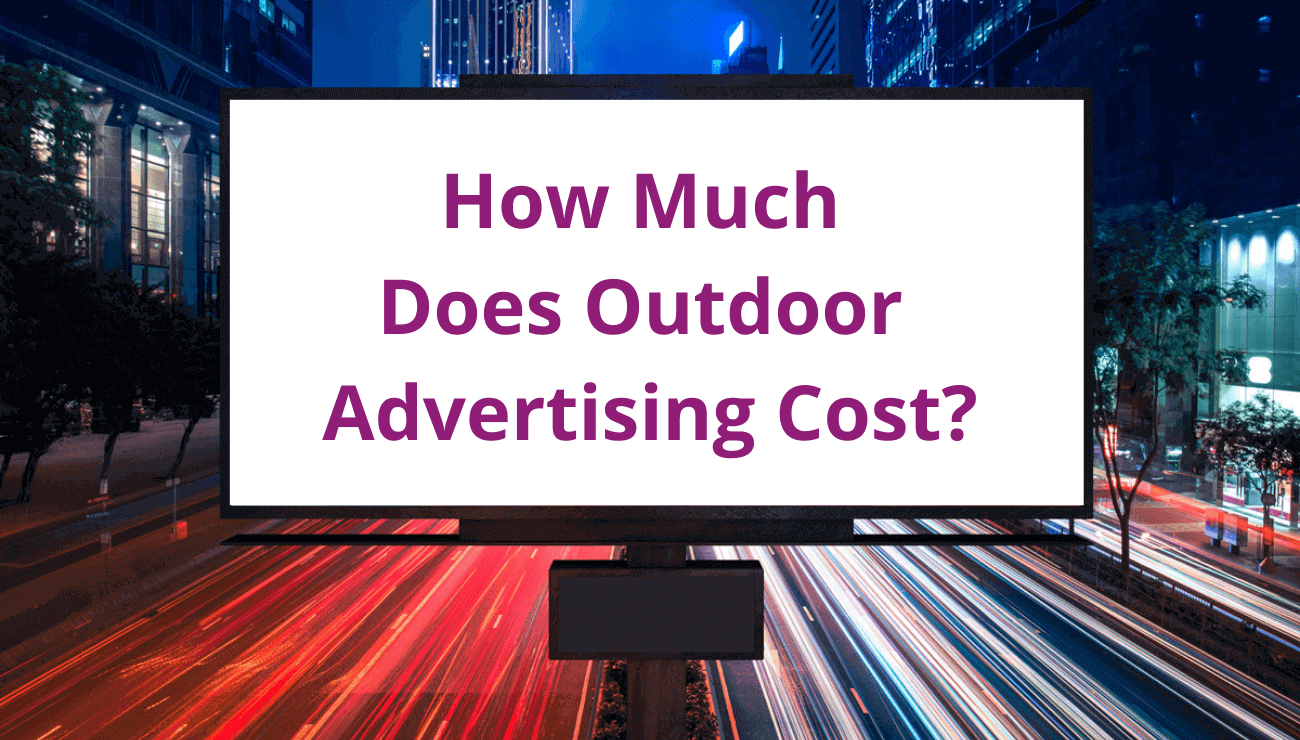 As the world of digital advertising continues to evolve, with trends and tactics coming and going in a flash, small businesses shouldn’t forget about an older method that remains effective in outdoor advertising.

With this financial angel-and-devil-on-your-shoulder routine always running, it’s no surprise that cost is always top of mind. And this is doubly true when it comes to advertising. Everyone wants the most bang for their buck, but following this mantra when promoting your business can literally be the difference between success and insolvency.

According to research from the Nielsen Norman Group, mobile and desktop users have trained their eyes to dodge internet ads as they navigate their devices. Billboards guarantee an audience because they can’t be ignored.

OOH can be a significantly more cost-effective solution for getting your brand and message in front of your target audience effectively. So, whatever your case may be, it’s time to stop “forgetting” about OOH and start thinking about how it can enhance your marketing mix, you may find yourself asking how much does a billboard cost? Well, the short answer is: it varies.

Contacting a nearby billboard company is the best way to find a good deal, but there are many other ideas to consider. Factors include location, format, circulation, impressions, demographics, design, and installation.

Let’s take a moment to break these down quickly:

Similar to real estate prices, the cost of billboards is largely based on geography and location.

You obviously have a particular target audience in mind when you’re thinking of running a billboard. Demographics is a breakdown of people that pass by a particular billboard on the basis of gender, income level, and age. So if the demographics consist of folks with a higher income level, you can expect a high number in terms of billboard rental.

Size of the Billboard

Similar to digital ads, there are many standard billboard sizes for brands to choose from. Billboard campaigns range from small, junior posters to the enormous digital billboards that adorn New York City.

But, OOH advertising is no longer just about traditional billboards. There are bus wraps, digital in-store, mobile billboards, wild postings, transit shelters, scooter decals, wall wraps, and the list goes on. The truth is, practically any inanimate object these days can turn into an OOH ad unit.

Consider this a general rule of thumb: the bigger the advertising space, the higher the cost of the rent. Needless to say, a bigger billboard is bound to improve visibility, increase brand recall, and boost the number of impressions. Plus, bigger sized boards require more material, doubling production costs for printing and then placement. So to answer your question “how much does a billboard cost?”, pay attention to all these factors.

The only exception to this rule is digital OOH ad units, which depend on platforms, production labor, and recurring campaign costs.

Like its location, the visibility of an advertisement is crucial to know how much it costs to rent a billboard. As a general rule, the closer to the road there is a billboard, that is the more visibility you have, the higher the price. On the contrary, the further behind the road is the billboard, the less expensive the rent. At least generally.

This makes perfect sense when one of the most frequent problems facing the design of a billboard is considered to be the readability of the text. By placing your ad very close to drivers and pedestrians, the fundamental problem is eliminated and they are allowed to read the text more easily.

Impressions are based on the number of people that see the ad based on the billboard’s overall size and visibility. These details are typically derived from geo-positioning or on the basis of circulation.

Demographics have to do with the age, gender, and income level of people who are typically passing by the billboard ad. Higher-income level areas and people living in them will see billboards that cost much more. It’s one thing to get your ad message in front of a lot of eyeballs. It’s another thing to get it in front of the right viewers. This is where demographics come into play.

Thanks to enhanced OOH analytics and the rise of programmatic for digital OOH, advertisers today have more opportunities to ensure that their ad buys reach their target demographics: gender, age, income, education level, and so on.

And as you may have guessed, placing an OOH ad in a more affluent neighborhood one where consumers potentially have higher disposable income will raise the overall billboard advertising cost. After all, there’s a direct correlation between getting your brand in front of consumers who can buy what you’re selling and getting them to act on a call-to-action.

Wrapping it Up: How Much Does an Outdoor Advertising Cost?

So you see, there are many factors that determine the overall cost of an outdoor advertising campaign, there is no concrete answer.

And one last hint: billboard costs are not set in stone and can often be negotiated with the owner!

We use cookies to ensure that we give you the best experience on our website. If you continue to use this site we will assume that you are happy with it.OkPrivacy policy